What have we achieved ?

In just over fifteen years Kauri 2000 has planted over 53,000 kauri seedlings on 36 sites around the Coromandel peninsula. Some of our more notable locations include the following.

Chelmsford on the Kopu-Hikui Road, including our Puketui Road, Tairua River site, is one of our largest sites. Planting first started here in 2000 and to date nearly 8500 trees have been planted there – it has involved huge effort by many volunteers year after year and is a real tribute to the organiser, past trustee Cherry Ladd.

Kauri Hill, Coromandel is an outstanding location, with some 7400 trees planted since 2001, stunning views and a walkway system established by another local trust that makes this one of our showcase sites.

Our plantings at Shakespeare Cliff and the Cathedral Cove Reserve are not extensive – less than 1000 – but these sites are visited by thousands of tourists annually. Prime Minsiter Helen Clarke planted our 10,000th kauri at Shakespeare Cliff in 2001. Newly planted Stella Evered park near Hahei will enhance this developing area, overlooking Cooks Beach. We started planting on DOC land in the Kauaeranga Valley with high hopes. With its rich kauri history, DOC’s visitor centre full of kauri memorabilia and displays, and thousands of trampers enjoying the bush every year, this could have been our major planting site. Some 1600 seedlings were planted starting in 2000 but the rampant pampas grass has forced us to abandon plans for further planting. Re-growth of pines has also meant this site has needed major releasing, although the kauri have generally grown well and are three metres tall in some cases.

Our plantings at Waikawau did not get off to a promising start due to the vigorous kikuyu and paspalum. However with consistent releasing over the years creating individual microclimates around each tree, the grasses have actually proved beneficial. The trees are growing healthily and can now be seen from the road. This is another site that potentially could enjoy high visitor numbers, as it is over the road from a large DOC camping ground.

Our site on DOC land at Waitaia was originally covered in two metre high blackberry and constant vigilance is needed to prevent it getting away again. About 175 seedlings were planted on an open flat area in the year 2000 followed by 400 on a ridge under regenerating bush in 2001.

The open flat area has proved something of a conundrum. While some trees have flourished and are now over two metres high, in one particular area seedlings have consistently failed to establish, despite two further attempts at replanting. We can only guess at something in the soil – maybe heavy metals or some other legacy from mining days?

DOC’s Matarangi Reserve is our newest site. This has the potential to become a flagship site for us, totalling some 253 hectares in regenerating bush. Max has identified an initial 10 to 12 hectare planting area with potential for 6,000 to 7,000 trees and in 2006 and 2007 we planted 1400 trees. However the potential is much greater, with strong local community support from local Kuaotunu, Rings Beach and Matarangi residents who are developing a network of walking tracks working with Coastal Walkways. As at 2015 this site now has over 14,000 kauri planted. 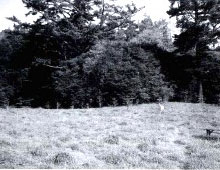 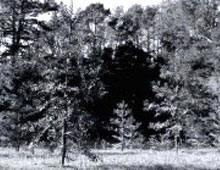